It’s Tuesday morning and my phone is ringing. Before even looking at the screen, I know it’s my sister,
Erikka. Every week for the past six months or so, my sister has spent 10 minutes telling me about her weekend escapades. The accounts are adventurous, liberating, and oddly enough, about love.

My sister, a mother of two, has been through some harrowing experiences. Just about all of the foul things a young woman can be involved in while growing up in the inner city—from selling sex to selling crack—she's done it. And she's open about how those experiences have left marks on her, physically, mentally, and emotionally. 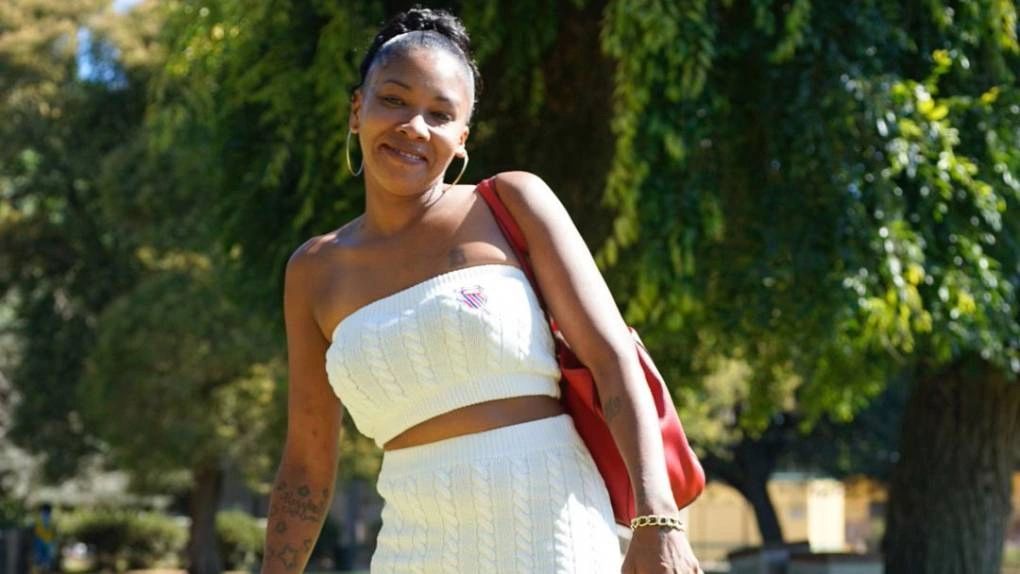 Now recently married, my sister’s phone calls aren't about the pain she's experienced, and really aren't about the romantic relationship she and her partner share. They’re more about her discovery of a loving community. And most importantly, her stories are about an East Oakland girl finding self-love near the Santa Cruz Mountains.

Because it’s her story, I figured she’d be the best person to tell it.

I found my love when I was only 15. He was my neighbor, my friend, and the love of my life, even though he didn't know it yet. We grew up together and separated when both our families moved from the Skyline Hills Apartment complex in the East Oakland hills.

We individually went through a great deal of hurt during our lives. Hard times financially, run-ins with the law, and relationships that scarred us for life.

In adulthood, we talked periodically, remaining good friends. We'd often discuss our relationships, and how they were missing something. We were both suffering, both missing love.

About four years ago I saw the love of my life again. I was driving down the street near Foothill Square in East Oakland. I had just moved into an apartment in the neighborhood. About a block away from my new home, I saw him outside taking a break from work. I almost left the car in drive as I jumped out! Happiness rushed back into my heart as I remembered love again.

Despite the pandemic, we married on July 27, 2020. We wanted to be together forever, so much that we held a small ceremony in our backyard, over an iPad, with the Justice of Peace. It was beautiful.

We're both lovers of camping; time spent in nature actually helped solidify our relationship. We decided to find a place to enjoy the outdoors during the shelter-in-place orders. But most campsites were closed.

And then we found a place that was unlike any other: Lupin Lodge.

This is a community that welcomes newcomers with open arms. We started going in August and we've been back every weekend, just because of the love we feel. The first day we were there, people invited us to eat with them, and asked if we needed anything. They even recited poems just to help us relax in a new environment. It was amazing.

I have to mention that Lupin is a “naturist community,” where people are free to be nude, so it was a little different than the camping experiences we've had in the past. During previous camping trips to places like Lake Camanche, I'd jump in the lake naked when no one was around. So once I found a place where I could walk around naked without having the police called on me, I was down!

There's nothing sexual about it. It's about being free. You feel the nature, and the love from everyone around you. And best of all: there's no judgement. You could be fat, skinny or whatever, and people are just accepting. I've been self-conscious of my stretch marks for a long time, and I didn't feel that when I was out there. I don't know if I've ever been to a place where I felt no judgement, even when I'm fully clothed.

My husband, Dom, is a man's man: a barber and Mustang driver. He was able to stand naked, and give handshakes and hugs to other naked men without feeling any type of way.

The experience was never weird or uncomfortable, like the movies about stereotypical "nudist colonies." It was like meeting a family you didn't know for the first time. And taking no time in really getting to know them. People do yoga and play sports, sing songs and break bread. Most of all, people simply spread love.

We've recently purchased an RV trailer and more camping equipment, and now we make the trek from the East Bay to the Santa Cruz area weekly. Each time it's refreshing to get away, if only for just a little while. The new family we have now has given us something to look forward to on the weekends; a blessing during these times.

And there's also people who are able to send “fake love,” feelings that damage peoples’ ability to sense and accept real love. I experienced a lot of fake love in my life, and it's refreshing to find the real thing. It takes time to find out what's really real. Trips to nature, and being in your natural state can help.

In my opinion, the easiest way to decipher the real from the fake is that when you question love, maybe you should let it go. And when you feel love with your whole heart—be it the love of a person or a place—embrace it and give love back in return.

A lot of people think nothing about being nude around their own homes.  They go inside after a long day at work, strip down, relax, and forget about the stresses of the world outside their front door. Some of those people extend their nude time to their backyard, pool, or hot tub. And there’s nothing sexual about it. It’s just a matter of being comfortable and free of constricting clothing. These people are home nudists.  Despite the porn industry’s fantasy that nudists are all about sex, we are not.  We believe that there is nothing inherently sexual about the nude human body. Sometimes you just want to take off your clothes because you are more comfortable that way. Whether it’s swimming, hiking, gardening, doing housework, sleeping, or just sitting around watching TV, you just feel more comfortable doing it without clothes. If you are a home nudist, consider visiting a local family-friendly nudist resort and meet others who feel the same way.  The nudist community is fu